Ronnie Retreats into his Towel

Being in the right place, at the right time, turned an impromptu visit to a Saturday evening snooker match in York into an unforgettable picture that only happens once in a lifetime.

It was unusual. It was Sunday, 11th December 2005, and I was driving into York. I don’t usually get to snooker events until Monday. I can’t remember why I had been arriving in York at 4pm that Sunday evening. I checked into my B&B, unloaded all my stuff, and pondered about what to do for the rest of the evening. I decided that I may as well go to the Barbican and set up my gear, ready for the next day. At about 6pm I arrived in the press room. It didn’t take me long to set things up. Looking at the schedule, I noticed that Ronnie was playing, so I decided to take some stock images of him for my library. He was playing Mark King, and it was a two table set. The next unusual thing which happened was that I was sat by the right-hand side of the table. I would normally position myself by the left-hand side of the table, it made better pictures, because as most of the players are right-handed their arm would not be obscuring their face. 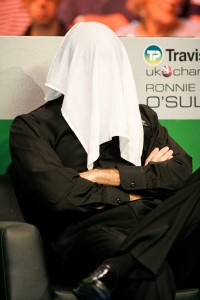 The match started, and I rattled off a few shots, expecting to be finished after about four frames, when it happened! I didn’t take much notice at first. It was not something that I expected to happen in a snooker match. At first I thought that Ronnie was just wiping his face with his towel. It didn’t really make a picture, I had loads of that sort: expression pictures. Yet it only took a few seconds before I realised what Ronnie was doing, and quickly reached out for my other lens to get the picture. It was adrenalin pumping. I knew an incident like this would only happen for a few seconds. I felt around my chair for the lens, holding the camera with the other, my eyes fixed upon Ronnie, wishing him not to take the towel off his head. Finding the lens I snapped it onto the camera body, aimed, focussed, and shot. It seems that simple, but it wasn’t!

The main problem in getting this shot was not that I had to find the lens, or even get it on the body, but that I had to move slowly, very slowly. Yet I wanted to move quickly, very quickly! I was fighting to get the shot, and any second I expected to lose the picture. My concern – as I fumbled for the lens – was that Mark was setting up his shot. He was on the ball, and I was eye level with him, directly in his line of sight. He was oblivious to what was happening behind him. Unaware of the player, who I could see over his shoulder, that resembled someone from the Ku Klux Klan! Any sudden, sharp, movements from me would distract Mark as he aimed for the black into the corner pocket. I couldn’t risk that. So for seconds I sat motionless, screaming inside for him to quickly hit the ball. It seemed like minutes, and I was holding my breath. I must have looked a comical figure, leaning over at 45 degrees, stroking the carpeted floor with my hand. I missed about half a dozen shots. It was exasperating. Yet Ronnie kept the towel on his head. I couldn’t believe it. What was happening? Mark played his shot, got up from the table, and in a split second I grabbed the lens, snapped it onto the camera, and aimed.

Get out of the way! 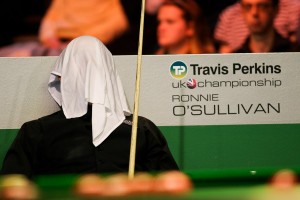 Ronnie O’sullivan sits with towel over head during his match against Mark King.. ©Eric Whitehead

Then the worst happened! Mark moved position and stood in front of Ronnie, blocking my shot. He leaned onto the table and totally obscured Ronnie. What? I had to move my chair. Re-position. I couldn’t do that while Mark was looking at me! Again I had to wait until Mark had taken his shot. I was hoping desperately that Ronnie would keep the towel on his head. I knew Mark would next play the black. He pocketed the red. I moved the chair, and I was ready.

It’s in the bag

As Mark stood up I grabbed a couple of shots of Ronnie, before he got down to the next shot. It was perfect. In the foreground was Mark, playing the black, with Ronnie sat behind, covered by a towel! I focussed on Ronnie. Click! Then two or three more shots as Mark lined up the shot. That was it! The pic was in the ‘bag’, and I breathed a long sigh of relief. What had seemed like hours, was in fact just a couple of minutes. I looked at my watch. This was a great picture, but unfortunately I knew it would be too late for that day’s editions who, except for the main news stories, or features planned, would have ‘gone to bed’ by now. I didn’t hold out much hope for the following editions either, because the picture would be old by then, and the papers would be full of football. Unless something ‘newsy’ happened in this match, it was a dead picture, although a great one. A few moments later Ronnie took the towel off his head and stepped up to the table, and the picture was gone. I waited a little longer just to see if something else would happen, but it didn’t. A part of me wanted to stay for the whole match. Another part of me wanted to rush up the press room and send out the picture to the papers. In the end I  went to the press room. I sent the picture to all the papers that I could reasonably expect would be interested in it, packed my gear, and went back to my accommodation.

The next day I scanned through all the papers, but, needless to say, the picture had not made any of them. Had the shot happened on another day then I expect it would definitely have made it. It was a case of great shot, wrong time. It sometimes happens. I was happy with the picture. If you buy Ronnie’s new book’, Running’, which is out this month then you will see it. Apart from the snooker magazines, this is the first time this picture has been published, that I am aware of.