How a routine snooker final turning into an amazing story, that graced the front and back pages of most of the national newspapers the next day

‘Plan B’ became the stuff of legend, and turned the 2001 Benson & Hedges Masters snooker final into a major news story. Paul Hunter was losing to 6-2 to Fergal O’Brien following the afternoon session, and the outcome looked a foregone conclusion, then Paul came into the evening session full of composure and smashed in four centuries to win the event 10-9. His comeback made the final newsworthy in itself. Yet it was not until the post-match press conference that the story received an unexpected elevation. A comment by Paul about what had happened back at his hotel room – following the afternoon session – that had enabling his comeback, had reporters scrambling for their notebooks.

I only heard about ‘Plan B’ as I was starting to develop the film of Paul proudly holding the trophy. A colleague of mine leaned his head into my room and commented that perhaps I should try and get a pic of Paul and Lindsey together because a story had just broken that Paul had attributed his victory to a passionate afternoon session with Lyndsey. It’s unusual for photographers to attend all the post-match press conferences, except on occasions where the player or match had some news value for that day, and certainly never after a final where deadlines made it almost impossible. So I was grateful that my friend had informed about this. Dropping the film on the table, I loaded another into the camera, and dashed downstairs into the players lounge to find Paul.

He was sitting with Lyndsey, and I asked him if I could photograph them together with the trophy. I couldn’t expect anything more than that, but the two of them together would provide a more appropriate picture than the one I already had. After all, it now seemed that Lyndsey was as much accountable for Paul’s outstanding victory as he was. They both agreed and we moved to a quiet corner of the room.

A tongue and a wink

The first few shots were okay – Paul and Lyndsey close together with the trophy – but I needed something more. I asked Lyndsey to give Paul a kiss, this would provide a more intimate picture, and she agreed. That was it, I had my shot, and prepared to thank them, and dash back upstairs. I had just taken the camera from my eye when Lyndsey smiled at me and turning to Paul quickly ‘tongued’ him on his cheek. In a second I composed the picture, there was only time for two shots. Then it was over, and laughing, they walked back to their group. 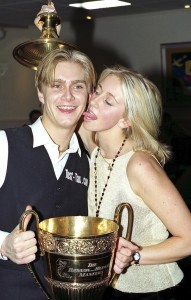 I ran back up the stairs, my heart beating wildly, excited, knowing I had got a great picture. It had been caught in a split second, in a flash, so to speak. I processed the film, carefully making sure everything was alright. No room for mistakes now; developer temperature correct, fix ready, water running, and then the magic moment as I drew the dripping roll of film out of the developing tank, and there it was, held up to the light, my amazing shot. Out came the hairdryer, and carefully the film was dried ready to be scanned into the computer. During this time journalists were enquiring about the shot so they could let their ‘desks’ know what I had got.

The image came up on the computer screen, and we all crowded around it. The shot was perfect; only one exposure made it, the other was a second too late. The perfect expression. The journalists saw the picture and ran out to inform their editors. “It’s going on the front page,” one said. I couldn’t believe that, I was over the moon. Seldom, in all my years in snooker, had a picture become so important.

The following morning we were at the airport, waiting to board a flight to Thailand for another snooker tournament. Expectantly, I bought all the newspapers, scanning through them to look for the picture. There it was; front page of The Sun, The Star, and the back and sports pages of many others. It is always exciting to see my photographs in the newspapers and more so on this occasion after having taken the opportunity to get the picture. Not all were impressed though; Paul’s manager telephoned me saying he wasn’t happy about the photograph. I couldn’t understand why, because it had made a great picture, promoted Paul, and also snooker. The border between press and public relations is a delicate one, and sometimes the two can never meet in agreement. Paul’s manager later did agree that it was a great image, and in the end he was happy, and so was I. ‘Plan B’ has now become synonymous with snooker; and something that people will remember with affection about one of the great snooker players and a really nice guy.