The Lowfield Way – An Outdoor Column

Staff and pupils from Derby High School tackle the snow covered massif of Coniston Old Man, and christen their new route up the mountain, The Lowfield Way.

My two-day visit to the Derby High School’s outdoor pursuits centre at Lowfield House in Coniston, Cumbria produced many surprises. Yet perhaps the most memorable experience was to be led up the snow slopes of Coniston Old Man and safely back to the village by a 16 years old schoolboy.

The route we took, which the school has christened. ‘The Lowfield Way,’ has a slight air of competitiveness about it. It all began during a visit to the house in July last year, when the cramped agenda consisted of geography and geology, with no space for walking. 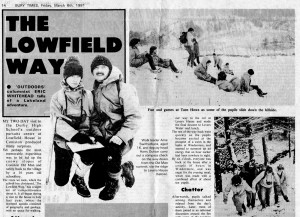 Yet to some of the pupils and teachers the temptation to reach the top of the Old Man was too strong, and at four o’clock, after a day of study, six people decided that an attempt could be made before supper.

The resulting trip took three hours and twenty minutes and descended by way of Brim Fell and Levers Water. Although not designed as a race, but merely as a route that others may wish to follow, it still generates that air of enthusiasm about it whenever it is attempted.

Early on the Saturday morning, I was greeted at the house with a friendly handshake from Mr Harry Dutton, the school’s deputy head, who was in charge of the group that weekend.

The party comprised some 16 fifth-formers and four teachers – one of them former Derby School master Simon Buckley. Though he now teaches in Wales, he maintains his links with the Derby High School, and with Lowfield.

By 10.30am, all the pupils were ready for the off, and we set off up the footpath heading for the 2,631 foot summit of the Old Man. The leader was 16 years old Arne Switherbank, one of the original ‘few’ who walked the route in July.

Way out in front, a figure was just distinguishable through the mist, striding out with a line of walkers behind him. Every now and again his characteristic voice boomed out, shouting encouragement or instructions to some who began to have second thoughts, especially when we reached the snowline and the path disappeared.

The route wound its way through the slate quarries and rounded the ‘Old Man Breast.’ Still the clouds caressed the icy slopes and the wind turned harder and colder.

It was decided to take a more direct route to the summit and join the path nearer the top, with some concern being given to the conditions, which had now turned from soft snow into quite compact ice in places.

But with careful guidance, all the pupils made it safely to the summit – even though at times groans of disapproval came from lower down the slope as they fought their way up. Yet later they all beamed with delight as they looked back on their acheivement.

The rest of the route lay across the summit ridge to Brim Fell, just 34 feet below. The only hazards here lay in the icy wind which blew over the top. A couple of pupils needed extra pullovers. Using a compass bearing, we found our way to the col at Levers Hause and made the final descent to Levers Water and lunch.

The rest of the way back went quickly as pupils became excited at the prospect of a swim in the baths at Windermere, and seemed to summon up an extra energy that an hour earlier had been nowhere in sight.

By six o’clock, everyone was back at the house, after a couple of hours in Windermere, and was eager for the evening meal, which was made with a combined effort of about ten pupils.

Afterwards, pupils talked among themselves and relaxed from the day’s activity. Later, most of them joined in an informal discussion around the fire with some of the teachers – and the house was filled with laughter and chatter.

Sunday dawned with tremendous activity, as an overnight snowfall of about three inches had blanketed the whole of the valley. The smooth white carpet of snow in the back garden soon became impregnated with dozens of footprints and the rain of snowballs continued for almost an hour. Eventually, order was restored and the breakfast prepared and rapidly eaten.

Today was to be a relaxing day, so I was told. The decision was taken to walk to Tarn Hows and back, a distance, I calculated later, to be roughly nine miles. The atmosphere on today’s walk was totally different, with pupils slipping, sliding and generally enjoying themselves in the miles of deep snow.

Tarn Hows is situated north of Coniston and is a well known beauty spot, easily reached by car. The circuit of the Tarn abounds in a variety of wildlife, and natural history.

The walk finished four hours later with a massed assault on the cafe in Coniston, where vast quantities of cream cakes and coffee vanished into hungry mouths.

Lowfield House is owned by the Derby High School, having been bought in 1964 for £3,000 at an auction in the Ship Inn, Coniston.

The financial struggle in the early years has been more than compensated for by the value it has given to generations of pupils and staff. Demand is now such, that pupils must fight hard to obtain the limited places on each trip.

Besides being a base for fell-walking, the centre is also used for educational activities. Field trips are common for such subjects as geography, geology and botany.

I totally enjoyed my weekend there and everyone I spoke to regarded Lowfield with fond memories and affection. The opportunity it gives pupils to experience the outdoor life must be of tremendous value.

Eric Whitehead is a Bury Times staffman and writes a fortnightly ‘outdoors’ column in our Tuesday issue. Local clubs are invited to send details of their activities to “The Outdoors Column,” Bury Times, Market Street, Bury.