At 9.15am on Sunday 26 June a team from the north of England became the first blind men to reach the top of Mont Blanc, the highest mountain in Europe. Their previous attempt was beaten back by some of the worst weather the Alps have seen in the past 100 years.

We ascended, on the first day, to reach the Grands Mulet refuge at about 10,000 feet. In the morning at 1.30am, we left the hut to begin the final ascent. The frozen snow posed problems, in that the trails left from the day before had iced into deep channels that caused stability problems underfoot. One of the largest contributing factors to the blind on an ascent like this is the long hours of continuous concentration needed in order to travel the route safely. 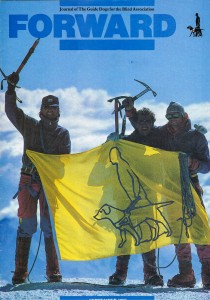 The summit photograph on Mount Blanc in the Alps. ©Eric Whitehead

In this case, it would entail a total 12-13 hours of non-stop commitment. The expedition leant into the 5,000 foot climb to the summit, and in total darkness we climbed using head torches. After two or three hours, the dawn was beginning to break over the jagged peaks of the Alps, lighting the clouds that covered the valley of Chamonix with a watery, yellow hue.

A lone tent high on the snowfield broke our concentration and the dim light inside indicated that it was occupied, a splendid site for a bivouac at 13,500 feet. No one said much as we passed and began to climb again out of the ‘bowl’ we were in; it was too much effort to speak. The ascent to the Dome du Gouter – the obvious dip on the horizon – brought home to all of us the effort that Alan and Dave were putting into the climb and the energy needed to keep it alert; it would have been easier now to turn back. It was at the Dome du Gouter that Dave began to feel the strain and once collapsed. He needed the encouragement from his friends and the drive in himself to continue; Alan was having similar problems. To both climbers, this was ‘their’ crux of the ascent – this halfway stage – when they had to look at themselves and rationalise their objectives. The success of the expedition was achieved at this point when they pushed their disability further than they had ever done before and succeeded.

The route now turned left along the visible horizon and to the Vallott Hut another 600 feet higher and about 1,500 feet below the summit, which we could not see from here. The climb involved steep ascents over ‘domes’, and the altitude was now affecting everyone. One of the party was experiencing altitude sickness, and we all had to keep stopping to get out breath back in the rarified air. 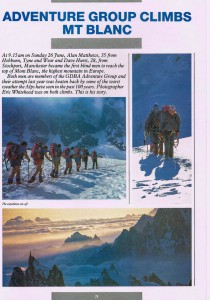 We had now reached the most dangerous part of the climb. The ridge gradually steepened and shrank into a path on the crest only two foot wide with drops on either side of thousands of feet. One slip and it was unlikely that anyone could be stopped from sliding over the edge. The summit, tantalisingly close, gave everyone the fight needed to conquer those last few hundred feet, which felt like thousands. Emotion kept swelling up inside us. We realised that at last we would make it, a few more breaths and the next twenty foot was achieved; every effort was being given to reaching the top.

The ridge levelled, the pace eased, and it was only another few minutes to the end of the path that marked the highest point on Mont Blanc. It is very difficult to describe how everyone felt when they stood there on the highest point in Europe, 15,770ft. All the peaks that had seemed so high from the valley were now many hundreds of feet below. The release of two years of tension and drive finally flooded out then, we all hugged each other, some cried, others sat down with their thoughts. We all realised that we had different personal reasons for being there, but we all knew that we had done it as a team. Special thanks must go to the organisers of the Guide Dogs for the Blind Adventure Group, who put so much effort into realising this achievement and to the sponsors who donated the much-needed equipment and money. The other team members of the GDBA Adventure Group on the climb were Phil Kennett, Darryl Evans and Ian Jones from the Outward Bound Trust, Geoff Reaid and Ken Underwood of the GDBA.