Presence in the Cavern 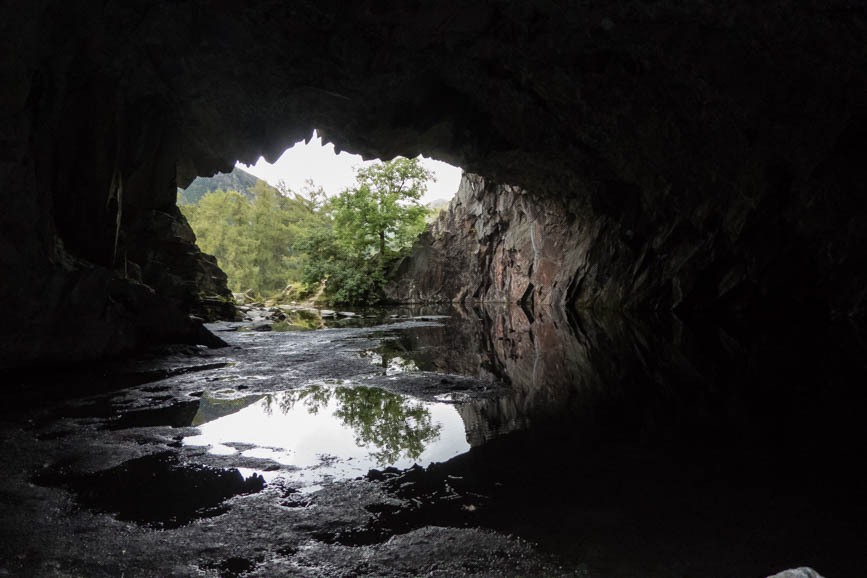 The object seemed cylindrical and protruded out from the blackness of the cave entrance. It shimmered with light, and yet was not solid. Geoff felt the wind on his beard, moving him, swirling around him, examining him, before he noticed it moving the object, caressing  it with unseen fingers. The wind had come from nowhere, and that puzzled Geoff because he was standing at the bottom of an 100 metre deep cavern. ‘How could there be any wind?’ he thought to himself. Then as suddenly as the wind had appeared, it was gone!

All was still, nothing now moved in the depths of this cavern, the blackness pervaded everything. The only thing he could see was this object, and he turned his attention back to it. It seemed to be suspended in the inky darkness that surrounded it, seeming as though it was suspended in space. He couldn’t see behind or around it, and he couldn’t see how far back into the cave it stretched. Cautiously he approached, his hand outstretched. He was afraid, and trembling. Step by step he drew closer to the object. His hand was only a few inches away. Again it moved, but this time it was not the wind. ‘What am I doing,’ he thought, ‘just leave it alone, get out!’ It moved again. He peered at it, hardly daring to breath. He calmed himself, maybe it was his movements that had caused it to move. It resembled a butterfly’s wing in its texture and he reasoned that it must also be as light. In the dim light of its own luminous he could only just make it out. It was partially hidden inside the cave. It moved again. This time he knew it was not the wind, his movements, or his breathing that had moved it, because for the last minute he had been holding his breath in fear. ‘Step back,’ a voice inside him shouted, ‘step back, run!’

Then, like a curtain unfolding, it started to spread out, gradually exposing more and more of this gossamer substance. Geoff jumped back! Alarmed he saw that what had once been cylindrical was now slowly unfolding, to expose its true form,. He thought it looked like a butterfly emerging from its chrysalis. It continued to unfurl. It now filled the cave entrance. A brilliant white light emanated from its surface which lit the whole cavern. It had the appearance of a large wing and, judging from its size, whatever it was attached to must be huge.

Geoff could no longer look at the wing, it hurt his eyes. The whole of the cavern was bathed in a white light. He could see the floor, littered with pieces of rock that must have fallen from the roof and walls, the same walls he had abseiled down only a few minutes before and which now towered above him converging around a small opening to the sky. It had been his entrance into this deep, dark world, and now it would be his exit back to the world outside, should he ever get up there.

A loud fluttering startled him. It sounded just like a bird’s wing flapping. He quickly turned towards the sound. The wing was huge and towered above him, he covered his eyes. It had stopped unfurling and he watched as it covered him. He was terrified, yet at the same time he experienced a strong sense of peace and protection. There was nowhere to run to. He thought about running back to the rope and starting to jumar up to safety, but he knew it would be impossible. He could do nothing. He was now completely at the mercy of the wing. His surroundings resembled the inside of an igloo with the sun shining through the icy walls. He could see nothing else but the glaringly painful white light.

Something moved. He caught a glimpse of it in the corner of his eye. He turned to look. He could see a leg, brilliant white, like marble. That was all he could see, everything else was hidden behind the wing which covered him. The words, ‘Do not be afraid’ softly resonated in his inner being. The wing became a wispy outline and then vanished. He saw a small white moth, or a butterfly, fluttering against the dark, then it too was gone, and he was alone again. He looked up at the daylight far above and made his way to the rope.