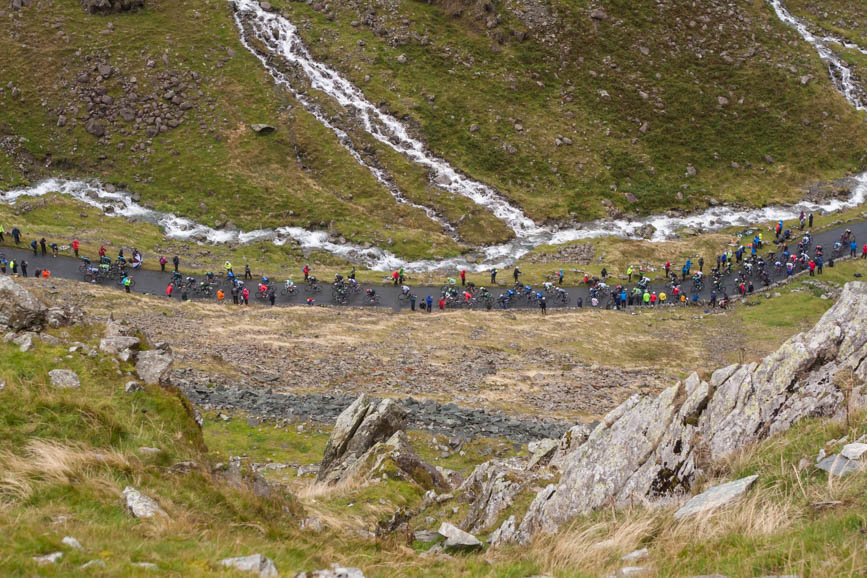 On stage 2 of the ‘Tour of Britain’ riders battled gale force winds, torrential rain, and hailstones. The conditions brought down many of the Tour’s top riders, on the 116 mile race from Carlisle to Kendal. Sir Bradley Wiggins was lucky to emerge unscathed after being caught up in a crash near Cockermouth on the wet roads. About 4 hours into the ride the cyclists had to climb Honister Pass the second of the three King of the Mountains stages. The pass is a formidable category one climb, reaching a height just under 360m, and is one of the steepest roads in England with a 1 in 4 gradient.

Crowds waited for hours, lining the approach to the summit of Honister, vainly sheltering behind lumps of rock, stone walls, and hiding in makeshift tents. They started arriving in the early hours of the morning, leaning into the wind, walking, driving, along the road to the slate mine for which Honister is famous. Cyclists, out of the saddle, fought the wind as they climbed the gradient, others walked, pushing their bikes, wind-battered, faces grim in the face of hailstones and wind. It was relentless, shower after shower blasted through the valley. The wind changing direction at will. Rain drifted across in waves; vertical, horizontal, carried along by the wind. Hailstones pelted off metallic car roofs. The sun shone for a moment, escaping the clouds, before being caught again and wrapped from view.

At the top, hundreds of cyclists huddled together behind buildings away from the wind. Many crammed into the small area where the bar-b-q stand was churning out burgers and hot dogs as fast as they were eaten. It was warm around the fire and cyclists jostled for position nearest the warmth, eating burgers and talking. There was still about 3 hours before the first of the riders would appear through the large stone walls that marked the end of the climb – a reminder of the bridge that once spanned the road in the days when slate was brought down by train from the wild exposed heights of the mountain. Many people sheltered behind the wall, eating sandwiches, stamping their feet, and waiting.

A large outdoor TV screen in the car park ran highlights from Sunday’s first stage in Scotland; buffeted by the strong winds I wondered how long it would stand. More cyclists arrived; there were bikes everywhere, all makes and colours. The small cafe that usually would see only a few guests a day was packed full of cyclists queuing up for tea and food. It was so dense that even the light could not penetrate through the windows, and all I could see were dim shadows of people standing.

The view down the valley resembled a march of refugees, lines of people climbed the pass, some riding, some pushing bikes, some walking. The road was awash with colour, people sat in small tents to escape the wind, others were wrapped in waterproofs so that only their eyes showed, many waved green sticks handed out by the sponsors. I talked to one cyclist who remembered the day he had cycling up Honister and was so exhausted at the top that he couldn’t stand and felt like he was going to be violently sick. He laughed at the memory. Still people arrived; there was still an hour to go. The road had been shut to traffic for over 2 hours already. Someone was brewing coffee on a stove in the shelter of the wall while others nearby hid behind a small slab of rock.

A picture through rain

I walked up the fellside. It was nearly time now. I knew the picture I wanted, the location, and made my way to it. The wind blew me to each side and backwards. Pelted me with hailstones so that I could not see where I was going. I sheltered in a small depression in the rock face at my location and waited. Every so often I looked around the corner, into the blasting wind that stung my eyes with hail drenched my face. I held my hand over my eyes so I could see down the valley, hoping that the rain would stop then I could see. The sun made another escape through the curtain of cloud and was again caught. In the distance I could see a blue light flashing, that was all I could see through the grey curtain of rain as the cyclists headed up the valley.